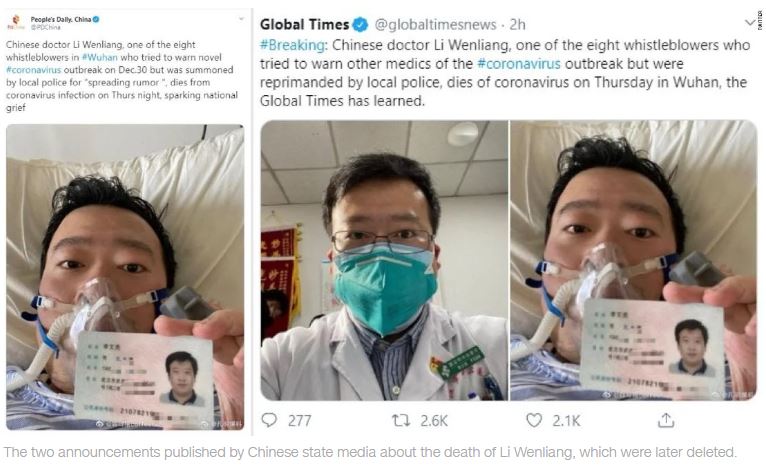 The conflicting reports over his condition only exacerbated public grief among Chinese netizens who largely considered Li, 34, to be a hero for his early attempt to raise awareness of the coronavirus. Li’s actions caused him to be targeted by the local police, who tried to silence him.

Here is how the reporting of Li’s death played out over Thursday and Friday, local time:

At around 10 p.m. Thursday — News begins to circulate on Chinese social media that Li Wenliang has died of the Wuhan coronavirus.

The rumors provoke a huge outpouring of grief and anger among Chinese netizens, many of whom already saw Li as a tragic figure after he contracted the virus he had tried to warn others about.

The two announcements published by Chinese state media about the death of Li Wenliang, which were later deleted.

At around 11.30 p.m. — The World Health Organization (WHO) says on its official Twitter that it is “deeply saddened” by the death of Li, but later deletes the tweet.

In a clarifying statement later, the WHO says it has no information on Li’s status and had just been responding to a question at a press conference.

12.38 a.m. Friday — Wuhan Central Hospital releases a statement saying Li hasn’t died, but is in a critical condition and doctors are attempting to resuscitate him. At some point around this time, the Global Times and People’s Daily reports on Li’s death are deleted.

12.57 a.m. Friday — Global Times says on its official Twitter that Li is “still under emergency treatment.” “Reporters heard people weeping inside the ICU,” the tweet says.

At about 2 a.m. Friday — The tide of emotion continues to grow on Chinese social media. The phrase “We want freedom of speech” begins to trend on Weibo, a Twitter-like website, before it is censored from the platform. Weibo users soon create another hashtag — “I want freedom of speech” — which quickly draws nearly 2 million views.

3.48 a.m. Friday — Wuhan Central Hospital announces on Weibo that Li has died at 2.58 a.m. despite attempts to resuscitate him. “We express our deep regret and condolences,” the post says.

At around 4 a.m. Friday — The Global Times and then People’s Daily announce on their Twitter accounts that Li is dead. The former references Li’s role as a whistleblower who tried to raise awareness of the coronavirus back in December.

Early Friday morning — The top comments under the Wuhan hospital’s announcement of Li’s death show anger at the handling of the news.

One reads post reads: “You think we’ve all gone to sleep? No. We haven’t.”CNN’s Yong Xiong and Nectar Gan contributed to this article.View on CNN